You may of heard of this culinary spice that seems to be everywhere, but have no idea what it is, where it comes from and what it’s good for. Well I’m here today to answer your questions!

This orange superfood is actually a pungent root, just like ginger, except smaller. It has been used for centuries in India and Iran for culinary and medicinal purposes, which were one-in-the-same- food was medicine and medicine was food.

Only recently, it has become widely known around the world for its anti-inflammatory and healing properties. Doctors are even recommending patients take capsules of turmeric daily to prevent osteoporosis, heart-disease and a whole host of other illnesses.

But here’s a less known fact that might just become your favorite- this vibrant herb is actually a powerful inhibitor of belly fat!

Sound too good to be true? It’s for real! Recent research has proven that this extremely potent spice can shed unwanted fat by facilitating the self-destruction process of fat cells through apoptosis aka cell death. There’s this active ingredient in turmeric called curcumin, which, according to a 2009 study done at Tufts University, attaches to fat cells and causes them to shrink and contract by suppressing the blood vessels needed to form fat tissue.

Turmeric also has the ability to aid healthy gut bacteria, which lowers digestive inflammation that would otherwise serve as a catalyst to the vicious cycle of weight gain.

This spice also proves its efficacy in reducing insulin resistance and reducing blood sugar levels, which are both critical components to shedding those extra pounds!

It gets even better. Turmeric has a thermogenic effect that increases our metabolism, creating heat that leads to faster cellular action. Believe it or not, this thermic effect can burn an additional 350 calories a day!

Let’s put this into perspective- we all know that sticking to a diet regimen for weight loss is not easy, but according to a review published in a 2011 issue of the European Journal of Nutrition, one simple serving of turmeric could compensate for that extra cookie or brownie you could not help but succumb to!

Your physique isn’t the only thing that turmeric will enhance- turmeric also helps heal the liver! And again, in terms of weight loss, the liver is the #1 fat-burning organ in your body. In this day and age, it is very common for the liver to be imbalanced due to dietary and environmental toxins, causing its fat burning potential to drastically decline. If you drink regularly, then your liver is definitely damaged, making it harder to shed that unwanted belly fat. Turmeric can’t outdo a lifetime of overindulgence but it can set you towards a healthier start.

Now, turmeric is heat-activated so your best bet is to add turmeric to your cooked veggies, curries or stir-fry. My Ayurvedic Teacher also taught me that turmeric is 50% more absorbable when paired with black pepper, which balances the flavor really well.

Besides cooking turmeric, another great way of getting your daily dose is to fix yourself my favorite nightly elixir called Sahara’s Belly-Fat-Burning Golden Mylk. This recipe is inspired by Ayurvedic wisdom but modernized and plant-based, geared towards fat-burning. 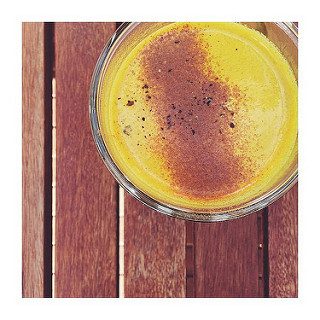 Where To Find Turmeric

Luckily because of all the good press, turmeric is super accessible and available at nearly any grocery store. I would advise buying the most potent form online or in health stores where organic turmeric root options are available. If you can find fresh turmeric root to grate into your meals and Golden Mylk, even better! I’ve seen it at Whole Foods and Indian supermarkets. Many companies now sell turmeric supplements as well if you can’t find a way to get it into your diet.

I invite you to enjoy a warm cup of Belly-Fat-Burning Golden Mylk tonight! Be sure to tag me in your photos on Instagram @eatfeelfresh!