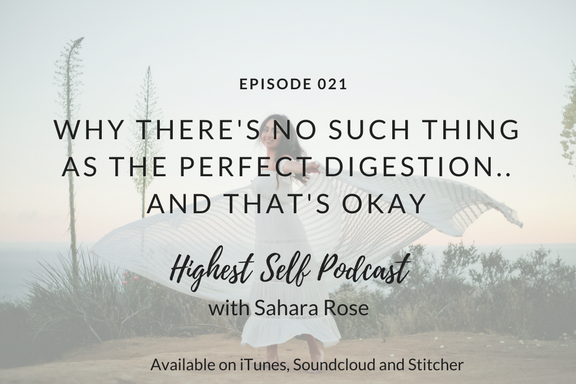 As I discuss in Episode 003, I used to be obsessed with digestion, which is what brought me to Ayurveda. Ayurveda is all about healing the digestion and when I first read that, I only thought of the physical one. Turns out there’s a lot more to life than digesting food. I discuss in this Highest Self Podcast Episode.

Can you relate? Join the discussion in the Mind-Body Balancers FB Group.

“Why there’s no such thing as the perfect digestion. And that’s okay.” Ayurveda is all about healing the digestion. And when I first read that, I only thought of the physical one. You see, I spent my early 20s obsessed with the digestive system. I had what was diagnosed as IBS—irritable bowel syndrome—which is basically the umbrella term that doctors use when they have no idea what your gut problem is.

I was chronically bloated, constipated, and often in so much pain after eating that I’d curl up in the couch, closing my eyes, just wishing it would go away. My entire mood was related to my digestive system. I could be having a good day, but as soon as I ate and the bloating kicked in, my day sucked.

Needless to say, this made me consumed with figuring out the intricacies of the digestive system. I’d stay up till 3:00 A.M. every single night just reading about gut-healing broths, and SIBO, and candida, and the GAPS diet, and paleo autoimmune protocols. I stopped really thinking about anything else. My purpose became my digestive system. After changing some things and following a vatta pacifying diet, A.K.A. no acai bowls topped with granola and frozen fruit first thing in the morning, followed by only salad and coconut water and kombucha for the rest of the day, my digestion got a lot better.

I was no longer in pain. It opened up some space not only in my gut, but also in my mind to think about other things.

I realized I spent so many years of my life only consumed about what to eat and what not to eat, that I forgot what the purpose of eating is: living.

Now I’ve learned as a nutritionist and Ayurveda practitioner that there’s no such thing as perfect digestion. There’s no one day where confetti flies from the air and the gut gods come down to earth and hand you a much deserved award congratulating you that you’ve healed all of the digestive issues that come with being a human being. No. Life goes on. And everything remains the same.

It’s what you do with the food that you digest. What you give out into the universe that matters. Food is only one thing that we digest. We also digest

I realized in hindsight that I was looking over all of those aspects of Ayurveda, focused only on the physical because that’s what’s more apparent to the eye. What if we thought about how we digest an idea and break it apart and turn it into an action? Imagine if we worked on that as much collectively as a society as we do about what can make us less bloated.

Yes, I know how annoying it is when you can’t eat food without being in discomfort. Trust me. It’s a necessary step to get rid of before we reach higher levels of enlightenment. But once you found a way of eating that makes you feel energized, nourished, and fulfilled, it’s time to move on and digest other things. Life. We are made of more than skin and bones, and if we focus only on the physical, we will remain there.

Who cares if we have the flattest belly in the world when it’s the only thing we focused our life on? If you die tomorrow, do you want written on your tombstone, “She was never bloated.” I doubt it. So why do we focus all of our attention on something that, in the grand scheme of things, doesn’t really matter. Heal your body. Nourish it. Feed yourself the foods that make you thrive. But don’t stay there. Rise from the body and enter the higher spheres where your soul is playing. That’s where the real magic is. I love you, Sahara.