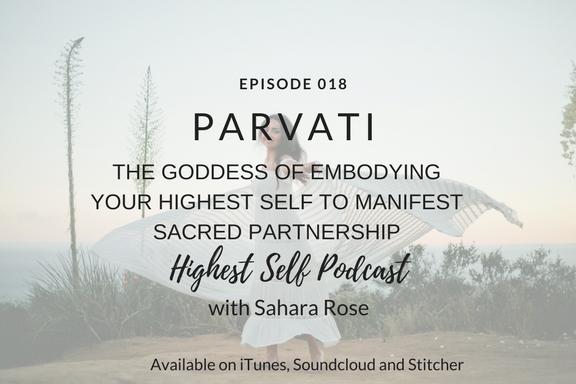 You all have heard a devotional chant to Parvati at the intro of my podcast, which is an amazing song called Silent Ganges by my dear friend Maneesh de Moor!

In this episode, I get more in depthly about how she is a true embodiment of first becoming your highest self to manifest sacred partnership. If you are interested in love, relationships, soul flames and twin-flames, this episode is for you.

If you liked this episode and want more on the various goddesses, leave a comment on the iTunes store here.

Namaste, it is Sahara Rose, and welcome back to the “Highest Self” podcast. A place where we discuss what makes you your highest evolvement. So this is a little spur of a moment podcast episode. I just decided to record right now because I was in the middle of writing one of my goddess posts. If you follow me on Instagram, you see that I discuss the various Hindu goddesses and what they represent in a very modern, engageable way. So I was writing today’s post on Parvati, and I thought it would be so fitting to actually just share with you her story so you can actually hear about it more indepthly.

So why am I starting with Parvati? Well, actually, you all have heard a devotional chant to her at the start of my podcast. In the intro music you hear her name in a bhakti, in a devotional chant. And it’s interesting because I chose that song because I love it, it’s really my favorite song of all time, I love how it makes me feel. The song is “Silent Ganga,” Ganges in English, by Maneesh De Moor, who’s a dear friend of mine that I met in Bali; amazing musician.

But in that song, and it’s so weird that I chose the part where it’s the hymn to Parvati. And I knew about Parvati, but I wasn’t like as involved with her, but now I’ve been researching recently, and she is the perfect person to be the intro music to my podcast. So let me tell you a little bit about her.

So, Parvati is a true representation of becoming your highest self, really. And I’ve always know her as the wife of Shiva. So Lord Shiva is the God of Creation and of Destruction. He was known to be the first yogi. He was very, very disciplined. So when Lord Shiva lost his beloved Sati, his wife, he went into very deep grief. And he sat in meditation for thousands of years, and he totally neglected all of his duties, he wasn’t creating, he wasn’t destroying. And Brahma, the God of Creation noticed that nature had lost its luster, the world was not the same. Everything had become dull and stagnant because without Shiva, there was no more disillusion, there was no idea, there was no creativity, no imagination.

So Brahma was really upset with this, and he was like, “How is the world going to live on when we don’t have any creation anymore?” So he went to the great feminine force Shakti, which is the divine feminine energy that exists in everyone and everything. So Brahma went to Shakti and was like, “What can we do? All Shiva’s doing is just sitting in meditation. He’s not creating.”

So Shakti was like, “Okay, you know what? I’m going to be born again as a human, a female, and I’m going to bring Shiva back into the world. Leave it to the ladies.” We’re like, “don’t worry, I got this,” you know. It’s like when a man has an issue, we’re like, “trust me, I got this figured out.”

So she gets reincarnated as Parvati. So Parvati, her whole life she was just so in love with Shiva. She would like sit in a meadow and like think about him, and like daydream about putting flowers on his feet. Like she was really like born to love him, but obviously nothing happened, and he was just still in his meditation. So she was like trying to figure out what she could do, she would like show up at his place, try to like give him flowers, do this, impress him, and he would not move from his meditation. So she was frustrated, and she decided to do something. So she went to the God of Love, Kama, and she asked him to show an arrow—like a bow and arrow, like a cupid’s bow—into his heart. And she was sure that this would work. And Kama was like, “Okay, I love making people fall in love.”

So he shot the arrow into his heart, and Shiva woke up out of his meditation, and he could feel this like stirring of passion in his body, but he was like really upset. And he was like, “Ugh, like I want to remain in meditation, I don’t want to feel this passion.” So he became really angry about it, and he roared so loud that fire came out of his third eye, and he killed Kama. He killed the God of Love. So then he closed all his eyes again—they have three eyes: the two you see from, and the one, your third eye that you see intuitively from—and he went back into his meditation.

So Parvati was like, “Oh my god. I tried everything. He even killed the God of Love. I don’t know what to do.” So she was just so frustrated, lonely. It’s like the one person that you were born on this planet to love did not love her back. So she was like, “You know what? Screw it. I’m going to meditate, too. If he doesn’t want me, I don’t want him.”

So she goes into a very deep state of meditation. And meditation is called yoga, really yoga means union with Brahma, with consciousness, with universal light. Yoga does not just mean asana, so she became a yogi, meaning she went into a very deep meditative state that she dedicated her life to spirituality. So for thousands of years she stood on one leg over hot coals, the coals not burning her at all. Then for another few thousands of years she stood on one leg in cold snow. And despite the extreme temperatures—the heat, the cold—she was untouched.

And even when she was in the cold snow, she built so much inner heat in her body, that her power had become so strong, that she had woken up Shiva from his deep state of meditation. So Shiva was like, “Whoa, like I can feel out there there’s like a yogi who’s on my level. Who’s like gotten to that state of depth.” So he’s trying to understand where this energy comes from, and he sees it’s Parvati, and now she’s in such a deep state of meditation that she’s like in her thing, too.

So to make a long story short, they fall in love, and it’s not because she’s beautiful and he’s this, but it’s because they have this passion together, and they both focused on being the highest versions of themselves. And what I really love about this story is because we, you know, especially in old traditional things, it’s all about she was the most beautiful girl in the town, and that’s why he loved her. And this is not about that all. It’s because she like stood on one leg and was like I’m not going to cry over you anymore, I’m not going to put flowers on your feet. I’m going to go deep within.

And she represents that part of us that is always working on our inner selves and doesn’t give up. And she shows that hard work and interdiscipline are necessary for love and growth. And it’s just such a good representation of you are in the relationship that you think that you deserve. So that might sound a little harsh to people, like “what? How come I’m attracting all these assholes?” Look within. And Parvati was not getting Shiva’s attention because she was not her highest self. She was coming out of desperation, out of need, out of “I won’t be complete without you,” and he wasn’t vibing with that. But once she was like, “okay, I’m going to be so in my own power,” he was awakened, and aroused by that.

So Tantra, the lovemaking comes between the two of them. Which is so beautiful, and that’s why Tantra is seeing your masculine or your feminine reflection in that other person. There’s parts of us that are masculine and feminine. But when the two are unions—the Shiva and the Shakti, because remember, she is Shakti, actually reincarnated, she is feminine force. That’s why we say Shiva represents masculine, Shakti is feminine. When the Shiva and Shakti can marry together, that’s when true transformation occurs.

With love, what would it feel like when you were in—if you’re in that perfect relationship? How are you going to interact with people differently? A lot of people think, “Well, if I was in a relationship, then I would be so much happier, I’d be so much peaceful, I’d be so much more centered. I wouldn’t be as all over the place.” Hello? Start now. Because if you’re waiting for that perfect person to sweep you off your feet and right all of your wrongs, it’s not going to happen.

So whatever it is that you seek, become that thing. And also, let go of unrealistic expectations, too. There’s never going to be a perfect prince charming or anything. Like Parvati and Shiva had problems, don’t get me wrong. It can get intense when there are two hyper powerful yogis in a relationship together. But what they did was they worked on it, and they remained in communication, and they had the same goals, shared goal together, which was to uplift consciousness in the entire universe. So that’s what brought them together, and that’s what helped them overcome anything.

So raise your own vibrations, step into your highest self, and Parvati will come to life inside of you. I hope you guys enjoyed. Let me know in the comments, I would love if you could leave a comment on the iTunes store. If you like these goddess stories, I can do more indepthly about all of their beautiful mythology, because it has so many lessons for us all to learn from. Namaste, thank you so much for listening.