Pumpkins are everywhere. I mean, it is Fall. From the lattes to the pies to the chocolates to the teas, everything seems to be pumpkin-flavored (especially if you shop at Trader Joe’s.)

Unfortunately, most of these pumpkin-infused goodies have something a little less blissful: sugar. You wouldn’t be able to count the times I’ve been dying to try a special something with pumpkin.. Only to put it back on the shelf because it contains more sugar than the root vegetable itself.

I’ve been way stricter with my sugar-intake this year. After my Killing Your Candida Program, I realized that sneaky sugar in my diet- honey, agave, dates, coconut sugar, maple syrup, etc- were attributing to excess bad bacteria in my gut. Candida causes bloating, indigestion, gas, constipation and further sugar-cravings.. All things I was suffering from. If this sounds something like you, I invite you to check out my free Kill Your Candida Webinar which explains step-by-step how to get rid of this bacteria overgrowth in your system. Anyways back to pumpkin.

So though I’m totally off sugar, both natural and refined, I still didn’t want to miss out on all things pumpkin-spice this Fall and decided to make these cookies.

Another thing I’ve significantly lowered (but not totally omitted) is my nut-butter intake. After getting a blood test this January, I was shown as sensitive to all nuts.. Which were a huge staple in my diet. If you overeat something and your digestive system is not up to par, your body can become allergic to it. I started producing antibodies to almonds, walnuts, peanuts and all the other nuts I was eating by the hand (or spoon)-full. But I still love the nutty-flavor that satisfies me oh so deeply.

Now how can I make cookies without honey, agave, dates, coconut sugar or maple syrup… Almond or peanut butter.. Butter or milk.. Flour, oats or anything with gluten… And only take max ten minutes to put all together because seriously #whogotthetime? Leave it to me to figure it out.

So I mixed together what I had in the pantry..

It was good but could be a bit sweeter. I decided to add some of my new favorite no-glycemic sweetener, Lakanto, which is made out of monkfruit from China. Then boom. 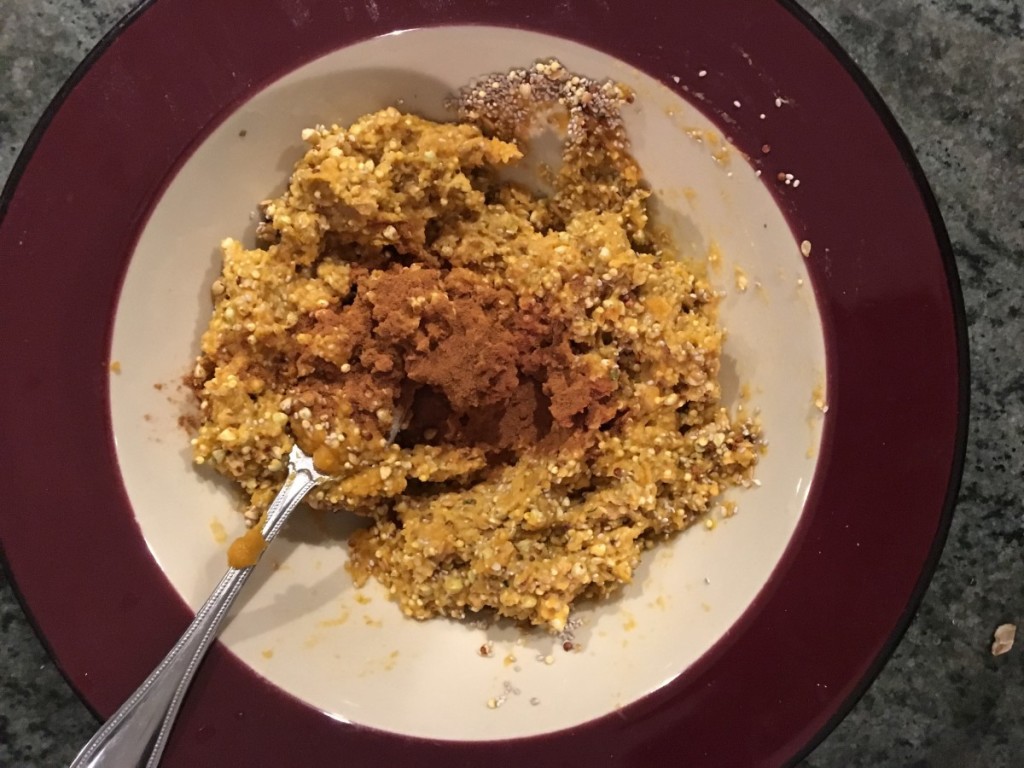 I couldn’t stop licking my spoon.

Every single ingredient in the recipe was absolutely perfect.
The Lakanto added just the right amount of sweetness that it needed to come to life.
The cinnamon gave it that pumpkin-spice taste we all love.
The tahini gave it the nuttiness and healthy fats that make desserts so delicious.
The sprouted grains gave it a crunchy consistency that paired so well with the pumpkin and tahini’s creaminess.
And the pumpkin was the vessel of it all. 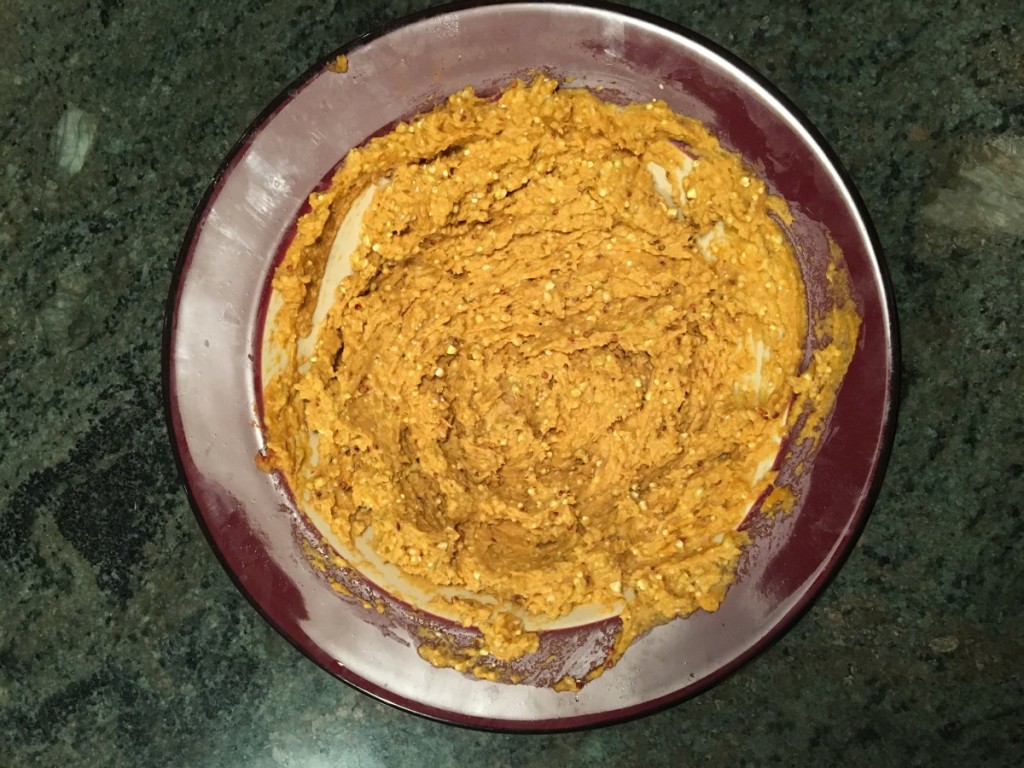 So this recipe could have just finished right here but I decided.. What should happen if I cooked this yumminess into cookies? I stopped myself from eating the batter with the spoon and threw them in the oven. 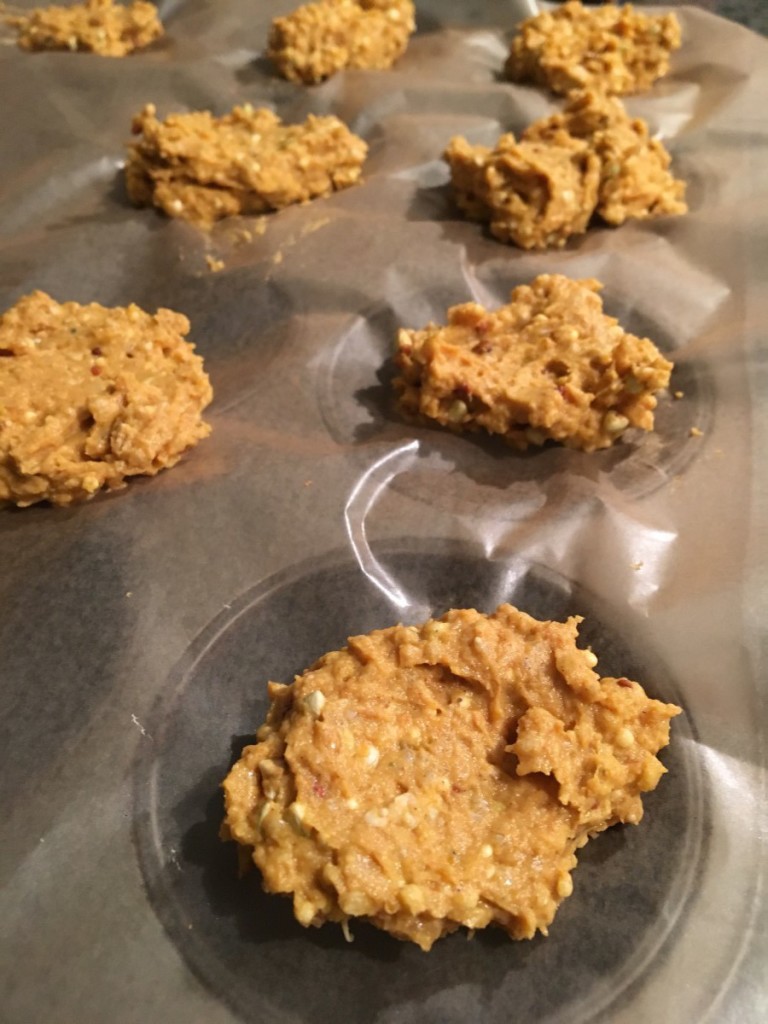 The results were perfection. 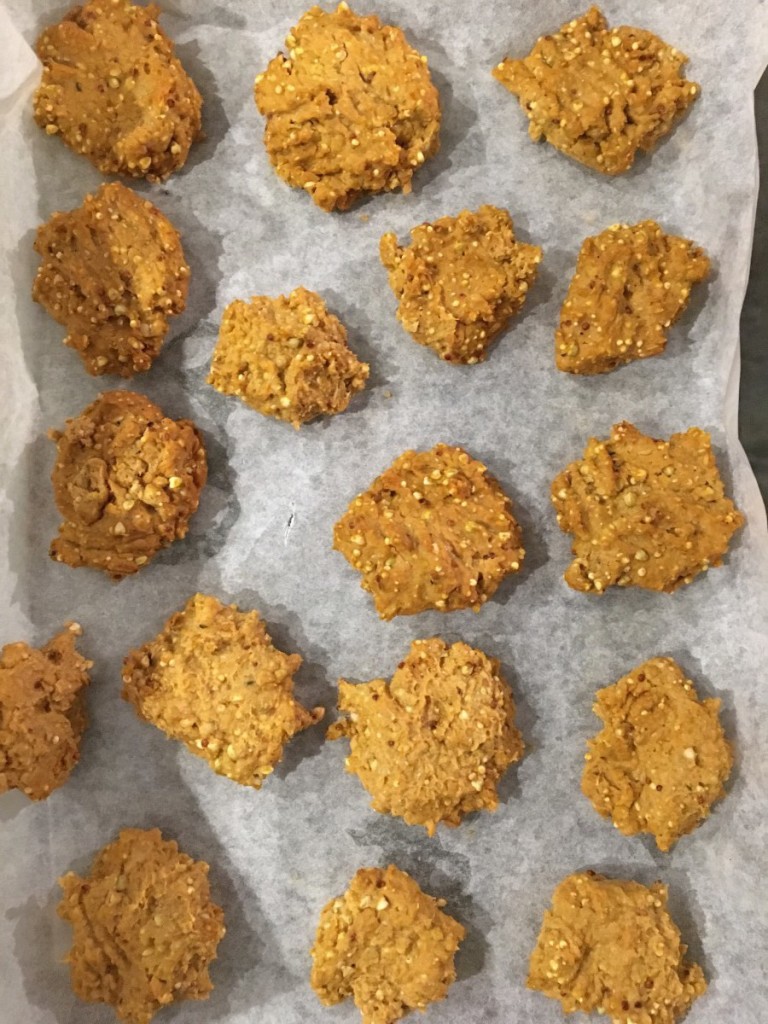 They only took 12 minutes to bake which is great because I wouldn’t have been able to wait any longer. Because they’re so light and healthy, they make a perfect breakfast recipe on-the-fly, but they’re also sweet enough for your afternoon sweet-tooth snack.

I absolutely had to share these 5-Ingredient Pumpkin Spice Cookies which also happen to be Sugar-Free, Vegan, Nut-Free and Gluten-Free with my Freshies because… you guys need to try these. Seriously, I promise you won’t regret it. And they’re easy enough to make for the laziest of chefs.

You could also just not cook them and roll them into balls and leave them in your fridge for whenever you are craving a creamy bite.Since there is no egg in the recipe, it’s totally safe to eat raw. I know a lot of times I’m in the mood for something creamy instead of cooked and this would definitely hit that spot.

If you don’t have Lakanto, order some! It doesn’t have the same bitter aftertaste that Stevia has and has NO impact on your blood-sugar levels, unlike even “healthy” sweeteners like raw honey, agave, maple syrup, date sugar, coconut sugar, etc. (I’ll be writing an article about this next!) It doesn’t feed the bad bacteria in your stomach and honestly tastes better than sugar.

Because I’m obsessed, I asked them for a coupon-code to pass along to you guys, which they readily agreed! You can use the code SAHARA for 10% off items. I used the Lakanto Golden but I also really recommend trying out the maple syrup!

Now without further adieu, here is the recipe. 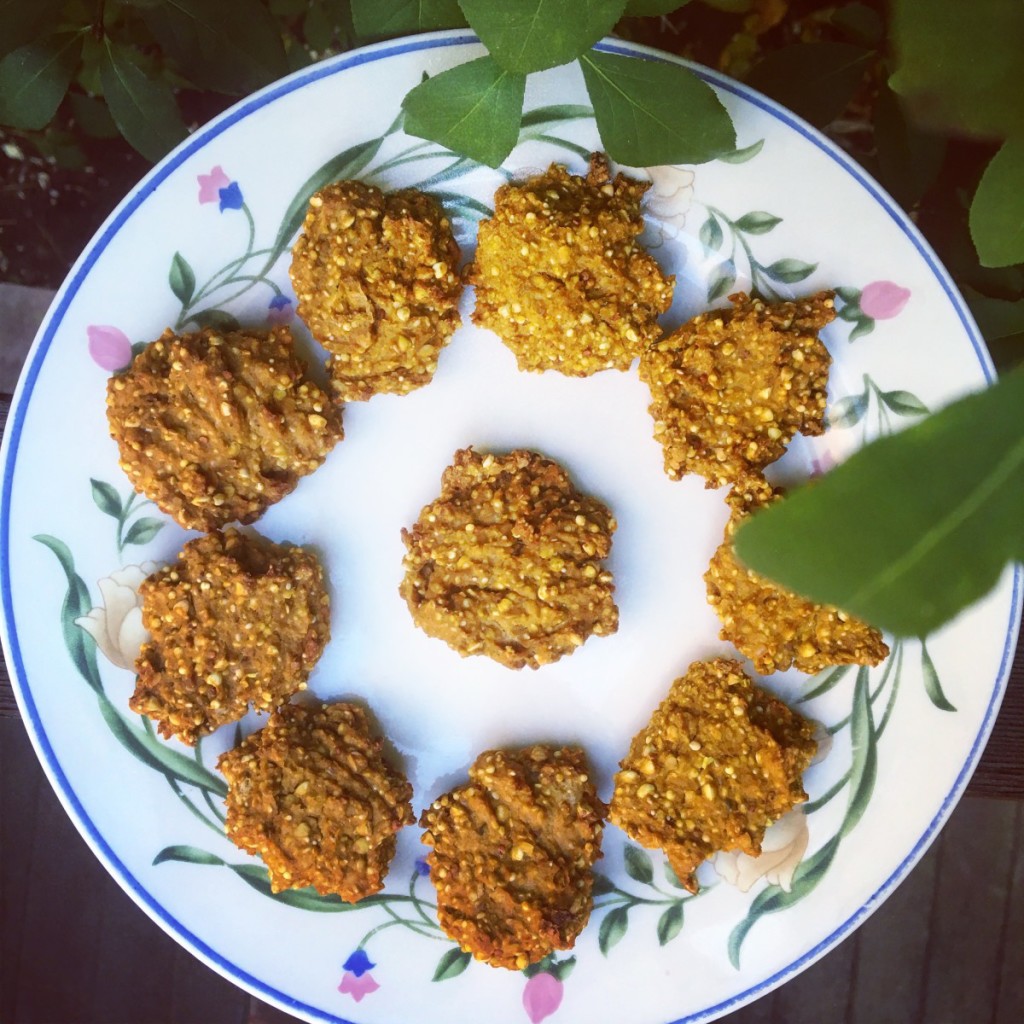 This recipe is recommended for all three mind-body types, Vata, Pitta and Kapha.
It’s grounding enough for Vatas, cooling enough for Pittas and light/ sugar-free enough for Kaphas.. Triple win!

If you don’t know your mind-body type, what are you waiting for?! Take my free Ayurvedic quiz here.

Have a friend who is pumpkin-obsessed but committed to a healthy lifestyle? Share this recipe with them! 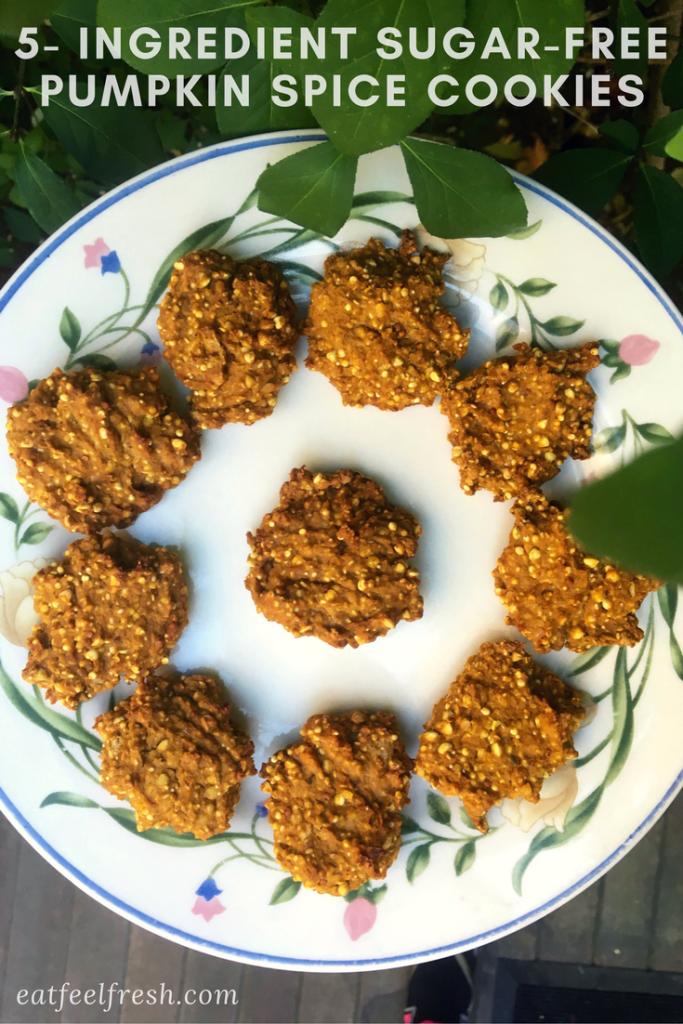 Pumpkin-spice and all things nice,