How I Found My Passion and Purpose: Part 1

People ask me everyday “Have you always known what you wanted to do?” The answer is NO! I really had no idea.

Everyday I would decide a new career, a new country, a new life I would live. It was like I was stuck between a million identities that all lived inside of me. I went to college to become an International Human Rights Lawyer and moved to Washington DC. My purpose was to end child trafficking, child prostitution, child soldiers and child labor. I majored in International Affairs, would spend all night studying in the library, interned at an NGO.. and hated it! Then what the heck was my purpose?!

Keep in mind healthy eating wasn’t really a priority at this time and I basically lived off Starbucks. I had no interest in spirituality and thought blogs were for losers. I wanted to be out there, in the field, helping children and saving lives. But I couldn’t do the traditional 9-5 and I realized those very NGO’s weren’t actually helping people.

I felt defeated and became depressed because what I set up my life for did not work out.. I stopped eating and lost over 30 pounds because I just lost interest in everything. I would just go to class and stay in bed for the rest of the day. I remember on one day all I ate were samples at the farmers market because I didn’t even care enough to buy food. My fire (agni) was depleted.

Deep down inside, I knew I was supposed to help people in some way shape or form, but had no idea how..

I remember one day Googling “symptoms of depression” and I could relate to every single one. Withdrawal. Loss of interest in things you used to love. Diminished appetite. Hopelessness. Yup that was all me. But this was not a way to live, especially in college which is supposed to be the greatest years of your life.

So I decided I would move back home to Boston to be closer to family and do a semester at Boston University until I got myself back together again and live with my cousin, who was like a sister to me.

I led a normal college life.. went to class, drank on the weekends, sometimes resulting in late night pizzas. I liked my classes; gender studies, international development, global politics.. but I wasn’t sure what I would do with all this information because I definitely did not want to work for the government and I didn’t want to sit at a desk filing spreadsheets and planning for the next fundraiser, which is what you do in most NGO’s.

I had volunteering extensively abroad in high school, living in villages, farms and orphanages in Costa Rica, Nicaragua, Peru, Thailand, Vietnam, Iran, amongst other countries. I needed to be there, hands-on, helping people directly. I wanted to feel their energy and know that my life made a difference in theirs.

There has always been on thing I’ve known for certain: that I was put on this world to help others. I just wasn’t sure how.

One boring afternoon in college, after strolling Pinterest for hours and pinning delicious food recipes, I decided I would create a blog. This is about 2010 before everyone and their mother had a blog. I didn’t know any bloggers or what it was all about but I figured “Why not?” It would be a fun creative outlet and I could share these cool recipes I’m finding and making. After deliberating for a day on what to call it, I decided “Eat Feel Fresh..” because you are only as fresh as what you eat! (Catchy, right?)

My first few blog posts were a bit all over the place.. some were about health and others about psychology.. I didn’t really have a “niche” or a marketing strategy.. I was doing it more for myself than anyone else.

I began sharing how I cured my own allergies by eating a healthy diet. Growing up, I was overweight and couldn’t play outside during certain times of the year due to my severe allergies to pollen, which led to asthma attacks. By cutting sugar and processed foods out of my diet, I overcame them and today have zero allergies.

I started receiving a lot of feedback from people inspired by my story. I began sharing tips on how you can stay healthy while you travel, easy recipes you can make in your dorm, beauty secrets I learned from my Grama. Really whatever I knew, I would share with others.

Blogging slowly became my life. In my free-time, I would research and write articles. Free-time became all the time. I would sit in a class about the political economy and be writing a post about sweet potato brownies. I couldn’t even pay attention to anything else. All I wanted to do was write more articles and learn more about holistic health and blogging.

I stopped going out, stopped drinking, stopped shopping.. All things I used to do every weekend. I let go of all things that weren’t true—designer bags, clubbing, all these stupid things that somehow seemed “cool” to me at the time (keep in mind I was 19).

In truth, none of these things were really me. I just did them because I felt like I was supposed to. In the process of becoming my true self, I lost some of my best friends, who talked behind my back and said I had become a “boring grama who wants to sit home and eat yogurt.” (Direct quote, lol.) At first I was hurt, but then I realized change is a part of life. If we never change, then we cannot grow.  People come and go in our lives and we cannot hold onto the past. All we can do is honor the time we spent together and the lessons we learned and move forward in our own paths.

This time of my life was all about expansion. I traveled by myself around the world, read extensively, watched countless Youtube videos, spent my Friday nights in bookstores getting lost in new titles. I was like a sponge, absorbing as much knowledge as possible about healing the body and it’s connection to our emotional wellbeing.

I realized so many of the things I was doing were totally wrong for my body. Starting my day with a Venti Soy Latte.. Followed by another one in the late afternoon. Pulling all-nighters in libraries, then going straight to class at 9am. Eating sugar-laden granola bars because they said “natural” on them. Not eating much during the day to save room at dinner then downing 2 appetizers, an entree and 2 desserts. Eating late at night because I would get home from being out and be hungry.. At 3am. Then sleeping on a full belly, only to go out for brunch again in the morning, ordering a veggie omelette and non-fat cappuccino, since that seemed like the healthiest option.

Instead, I completely changed my lifestyle, through and through. I slept and rose earlier, making 7am yoga classes. I began making all of my own meals instead of buying them from Chipotle and local coffee shops. I started putting masks on my face made of things people normally eat.

Yes, people thought I was weird and some missed the “old” me who was always up to go out at any night of the week, eat late-night carbs, watch Pretty Little Liars all day and stalk celebrities on social media. But that wasn’t the real me. It was the lesser version of me, one that left me feeling depleted.

The real me is a creatress. She can’t sit still and watch but she must do. She doesn’t like to waste her days buying clothes or gossiping about others. She is run by compassion, creativity, unity and love.

Finally, after a dark period, I felt more alive than ever. My soul was set on fire and suddenly I had a purpose, to help people become healthier and happier.

I had no plan, no following, no certifications, but I kept posting, day after day, not just to heal others but first and foremost, to heal myself.

With every post, I would learn and grow, stepping into my power. I wasn’t really sure what would come out of this whole blogging thing. I definitely never expected it to become a career. I just knew it felt right and kept moving in that direction. 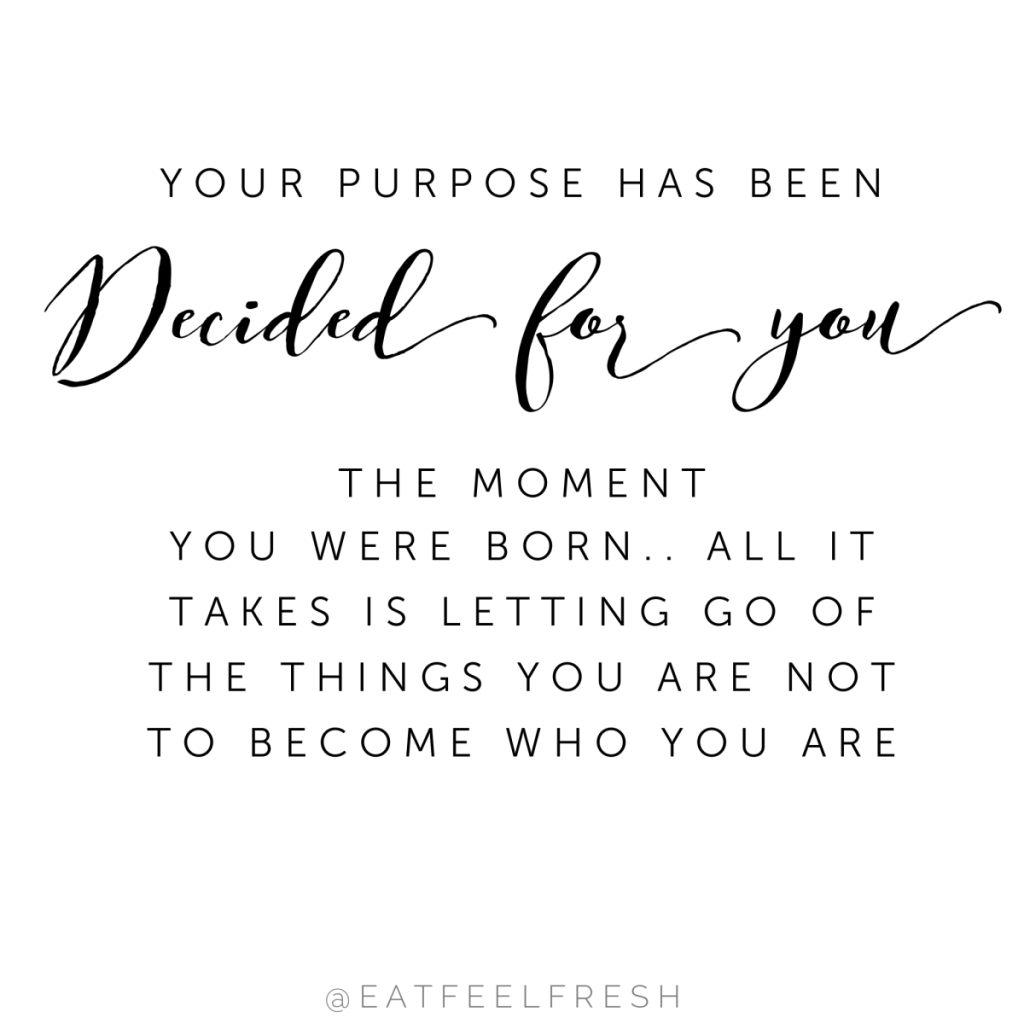 Have a similar story? I would love to hear it. Comment below!