Love the smell of cinnamon & crazy for the crunch? Here is the recipe which combines the two – Cinnamon Toast Crunch Pudding. 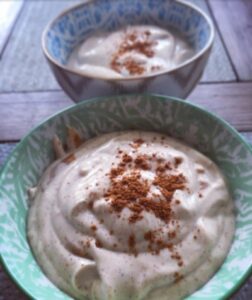 Memories of my childhood drinking the cinnamon-sweet milk from the bowl after finishing what’s left in my once-crunchy, now-soggy bowl.

Unfortunately, due to the sugar, high fructose corn syrup and a million other chemical ingredients in the seemingly innocent Cinnamon Toast Crunch recipe, I haven’t gone near it in probably 15 years.

Oh and our reunion was beyond amazing. Except it didn’t contain any Cinnamon Toast Crunch at all.

I have a thing for pudding. Maybe it’s the Kapha in my Prakriti (Doshic combination I was born with), but I love anything soft and creamy with little-to-no chewing involved. Like I am down to be a baby again just to be fed spoons of baby-food.

Want to know your doshic combination? Find out using my free dosha quiz

So I decided to make something reminiscent of my childhood Cinnamon Toast Crunch loventures except with the smooth, creamy textures of the puddings I love today.

Oh and raw, vegan, gluten-free, sugar-free, Candida-friendly and Ayurveda-approved, of course. Just the standard list of things to consider before putting something in my mouth.

So I created this Cinnamon Toast Crunch Pudding that matches all my standards, health and taste, and then some!

Here’s the recipe for you hungry monsters.

This recipe is best for Vatas and Pittas, especially after a workout as it boasts over 20 grams of protein per serving. It can be had in moderation for Kaphas. If you don’t know your mind-body type, take it on my free quiz on the homepage here.

Cinnamon, spice and everything nice,