Chai. Something about it is so delicious. It’s soothing, it’s warming, it’s flavorful. And best of all, it’s totally Ayurvedic.

Chai is actually the word for “tea” in Hindi, Farsi and Arabic. The chai that we know today is the traditional Indian “chai masala” which is spiced Indian tea.

Aromatic with flavors of cinnamon, ginger and cardamom, chai has taken the nation by storm. Almost every coffee shop has their version of a chai latte, which isn’t exactly the traditional Indian way but still delightful.

The problem, however, with chais you find at coffee shops stores is they are full of sugar. Just a Starbucks chai latte has about 14 tsp of sugar. Not exactly a healthy Ayurvedic beverage.

However, chai is extremely easy to make at home. I often make a large batch of the tea- sans milk- and keep it in my fridge to add to my concoctions. You can also find unsweetened chai concentrate at Bhakti Chai, which is what I used in this recipe. 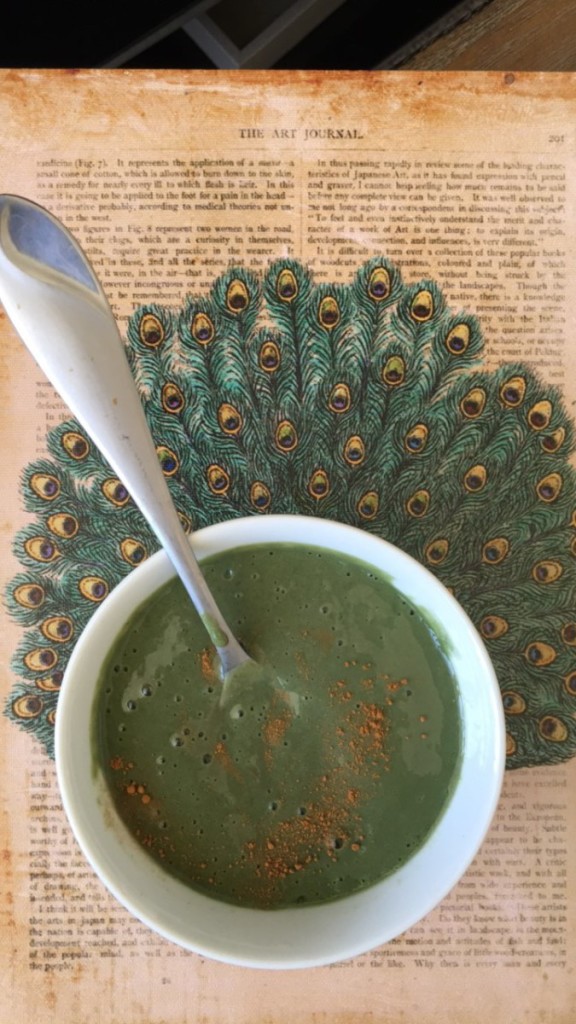 So smoothies aren’t typically recommended in Ayurveda because in ancient Indida they didn’t really do raw food due to the soil in the bacteria. However, here in the US we can consume raw foods without a problem. Ayurveda also states that raw foods may too cooling for the digestive system, especially if you are a Vata type. However, if you have more Pitta (fire) in your system, you can consume them without a problem. I had to go without smoothies for a while when my Vata was severely off-balance but now that it’s back I can have them with no problem..  As long as I consume them in the right way.

I love green smoothies and really feel my best when I start my day with one. They’re a great way to get your greens in, cleanse out your digestive system, flush Candida out of your system and keep your immune system up.

I always sneak in superfoods like spirulina and maca to make my smoothie even more potent. Without a smoothie, it would be hard to get these ingredients into my daily diet. Raw foods make me feel radiant and alive and they’re something I want to keep in my diet.. While still eating right for my mind-body type.

I found that I can have a smoothie without any bloat as long as it has warming qualities. What does that mean? Warming foods stimulate the digestive fire, making them easier for the body to break down. These warming ingredients include cinnamon, ginger, cardamom and other spices.

So what better than adding chai to my smoothie?! Not only does this add warming qualities but it gives it a powerful punch full of spice and aroma.

Here’s my recipe for my Berry Banana Chai Green Smoothie

Let me know in the comments!

Cinnamon, spice and everything chai,